Beranda / AS Roma Gets Bad News ahead of Opponents Barcelona

AS Roma Gets Bad News ahead of Opponents Barcelona 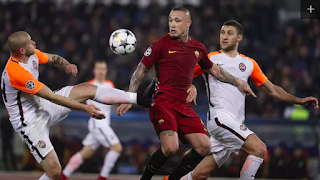 AS Roma will travel to Barcelona headquarters in the first leg of the Champions League quarter-finals 2017/18 on Thursday (5/4/2018). Coming to this important duel, Roma threatened to lose one of its players, namely Radja Nainggolan.

Roma could only draw 1-1 against host Bologna in Serie A on Saturday (31/3). Nainggolan injured and replaced Gerson when the game has been running 17 minutes.

According to Goal International, Nainggolan seems to have a right thigh muscle injury. This situation clearly made the Roman tifosi feel anxious. The reason, the Belgian midfielder is one of the key players in the squad Giallorossi.

Against Bologna at Renato Dall'Ara, Roma lagged behind Erick Pulgar's 18th-minute goal. Edin Dzeko, who came in in 61st, scored a reply in the 76th minute.

Next, Roma will face Barcelona at Camp Nou. Against a team as strong as Barcelona, ​​Roma will need all the key players. Nainggolan fall into that category. (gl / gia)