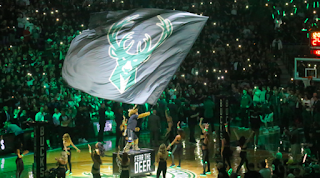 MILWAUKEE -- If forcing a decisive Game 7 was the main victory for the Milwaukee Bucks at the BMO Harris Bradley Center Thursday night, mascot Bango's antics were certainly the "icing on the cake."

During a timeout, Bango appeared with a fan in the crowd who was celebrating his birthday. The appearance was quickly derailed, however, by a braggadocious fan wearing a Boston Celtics t-shirt.

Bill Clinton, Other Big Names Spotted At Game 6
As the Bucks fan posed with Bango and his birthday cake, the mascot clearly decided it was time to take the Beantown booster down a peg, launching the cake full-tilt into his face as the home crowd roared with approval. Watch below:

The opposing fan seemed to take it well. Actually, he was mostly preoccupied with getting giant globs of cake out of his eyes.

The Celtics took it to the face as well, as Giannis Antetokounmpo and the Bucks went on to win by 11 points, forcing Game 7 in Boston Saturday.

Plant or not, it was a humorous moment in what has been a remarkable playoff series for Milwaukee.