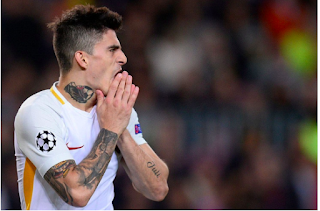 The Champions League semifinals kick off Tuesday, but we already know the final will include one traditional power and one team that has not played in a European final in at least a decade. Roma will face Liverpool on Tuesday in a rematch of the 1984 European Cup final — the last time Roma made even the semifinal of the European Cup or Champions League. By contrast, Wednesday’s semifinal pitting Bayern Munich against Real Madrid features two sides which have won four of the Past five Champions League trophies.

This does not mean the Champions League winner is certain to come from Wednesday’s marquee match. While Liverpool, 11 years removed from a Champions League semifinal, does not have the recent pedigree of Bayern and Real, the Reds have played at a similar level to the super clubs this year. By expected goals difference, a measure of the quality of chances created and conceded, Liverpool appears much closer to Bayern and Real than to Roma. 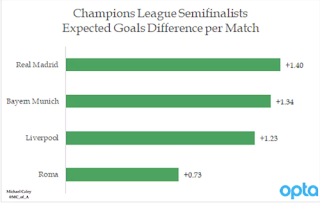 In the first semifinal, then, the question is what Roma can do to pull off the upset. Liverpool has been one of the highest-pressing and highest-possession sides in the Premier League. In its first-leg match at home at Anfield, it should be able to control the ball and midfield. This is a dangerous position for Roma, but opening up to contest midfield and conceding space for Premier League player of the year Mohamed Salah to get into one-on-one contests with defenders would be worse.

The Reds have been increasingly dangerous from possession this season. Salah’s ability to create shots for himself and his teammates has been game-changing. Salah’s 0.74 expected goals per 90 minutes place him second in the Premier League behind Harry Kane of Tottenham Hotspur, and his 0.29 expected assists are seventh in the league among players with at least 2,000 minutes played. Both figures lead Liverpool. Roma will have to find a way to prevent Salah from creating chances for himself or his teammates to finish, most likely by packing defenders deep and conceding space in midfield.

The most likely outcome is that Roma cannot stop Liverpool from scoring. But if the defense holds or Liverpool struggles to finish, Roma’s counterattack is dangerous enough to create problems. Roma has its own expected goals leader up top, with center forward Edin Dzeko topping Serie A with 0.59 xG/90. Stylistically, the Italian side likes to strike quickly. Roma is first in Serie A in both shots attempted from moves of two passes or fewer (140) and shots attempted from direct counterattacks (33). These moves tend to have a similar pattern of play. Winger Diego Perotti functions as both the quick outlet for attacks and the man who drives attacks forward. He is expected to be fit for Roma after a recent injury, and he will match up against young Liverpool fullback Trent Alexander-Arnold.

Progressive passes are defined as passes that move the attack forward at least 10 yards beyond where the ball had progressed in the move so far. This stat shows that Perotti is the fulcrum of the attack for Roma. If Liverpool faces a risk in this match, it is the quick attacking outlet to Perotti and a fast counterattack that isolates Alexander-Arnold, with Dzeko running to finish the play off. Roma will be looking for its preferred direct attacks if it can hold Liverpool quiet.

In the other match, the pattern of play is more difficult to predict. Bayern Munich and Real Madrid both have among the best attacks in the world, averaging more than two expected goals per match in the league. Both teams dominate the progressive pass and run charts in their leagues — there is no one attacker to key on to prevent a dangerous move, they can all move the ball with the best in the world.
Unlike Roma’s attack, which tends to run through Perotti, Bayern and Real have multiple central midfielders who are among the best passers in the world — Luka Modric and Toni Kroos for Madrid, Corentin Tolisso and Thiago Alcantara for Bayern Munich — as well as exceptional advanced playmakers like Arjen Robben, Franck Ribery and Francisco “Isco” Alarcon. The most notable name here is perhaps Madrid fullback Marcelo, who at 29 takes up somewhat less aggressive attacking positions and contributes through his passing as much as through his off-ball runs down the wing. With Bayern so stocked with wingers, Marcelo likely will need to be careful about getting too advanced, but he can contribute at an elite level even without offering constant overlapping runs.
The main stylistic difference between the two teams is how much they contest midfield. Bayern Munich breaks up about 54 percent of new opposition possessions within four passes or fewer, the highest rate in the Bundesliga. Real Madrid, with a 46 percent pressing rate, is seventh in La Liga and right about at the league average. Madrid counts on its back line to make plays to stop opposition attacks rather than breaking up play early in midfield. One might suggest that this approach is a risky one against the best teams in the world, but Manager Zinedine Zidane has set up Madrid with a less aggressive midfield strategy for two years running and has consecutive Champions League trophies to show for it. The defenders tend to make their plays for Real.
Ultimately, this match should feature two heavyweights throwing haymakers. With dangerous attackers all over the field, wide or central, advanced or reserved, neither team can be stopped by a specialized defensive strategy. Maybe this is the year that Real’s lack of pressing in midfield becomes a problem, but history suggests against that bet. Instead, in a match of strength against strength, the likely question is simply which stars have their best game at the right time.