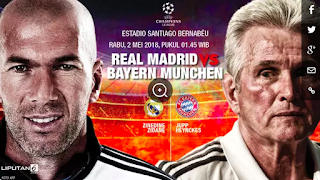 stringing the third Champions League final in a row. However, their opponents in the semi-finals this time is not an ordinary enemy.

In the second leg that will take place on Tuesday (1/5/2018) or Wednesday morning GMT, Los Blancos, as Real Madrid, will host Bayern Munich at the Santiago Bernabeu Stadium.

Coming to this fight, Los Blancos are winning 2-1 on aggregate. However, the dream of Real Madrid knit a dream to the Champions League final in three consecutive stages is not safe.

Bayern Munich is a team that has not lost in four away Champions League away this season. They have scored nine goals and conceded four goals.

Not only that, Robert Lewandowsko and his friends came to the Santiago Bernabeu with a status as Bundesliga champions this season. Bayern Munich also has a Colombian midfielder currently lent Real Madrid, James Rodriguez. 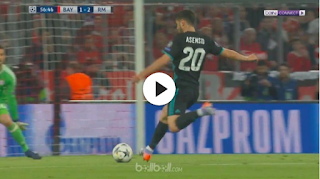 "What we have done in the first leg match is very good, but now we have to show that we want to advance to the next round.This is the semifinals and we understand the importance of it.We do not have to make any changes from what we have been doing and playing with concentration and determination, "said coach of Los Blancos, Zinedine Zidane, quoted from the club's official website.

The Frenchman admitted his foster children are very motivated meraig three consecutive Champions League titles. Because of that, Zidane sure, Cristiano Ronaldo and his friends will not play defensive to maintain the advantage.


The key for us is to get into the game to win the game. Not speculating, retreating, or doing strange things. We have to get out to score as soon as possible. Bayern Munich is a great club and we are very aware of it. Real Madrid must be ready and also capable of playing one great game, "he said.