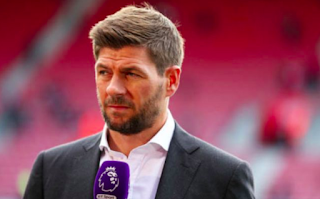 The Egypt international was in inspired form once again to notch two goals and two assists against his old side in a 5-2 victory for Jurgen Klopp’s side.
Liverpool still face a potentially tricky second leg at the Stadio Olimpico, with Roma notably overturning a similar three-goal deficit against Barcelona in the last round.
Still, that can take nothing away from Salah’s immense contribution, with the 25-year-old showing once again why he’s fast becoming regarded as one of the very finest footballers on the planet.
His brace tonight took him to 43 goals for the season – above Cristiano Ronaldo and Lionel Messi in the race for the European Golden Shoe, and Gerrard actually believes the Reds front-man is currently ahead of those two as the best player in the world. 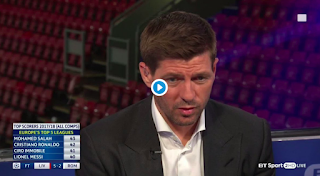 This is quite a claim from Gerrard, though it’s getting harder and harder to argue as Salah proves so decisive in Liverpool’s impressive run in the Champions League this season.
The former Chelsea man also scored in both legs of the club’s quarter-final win over Manchester City and he was named PFA Player of the Year over the weekend.