What is Merged Mining? 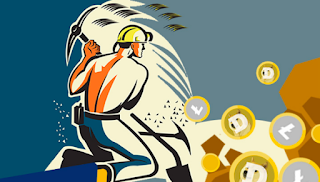 fokuskan.com - This article will explain what understanding is Merged mining or Auxiliary Proof-of-Work. Merged Mining is a process of mining two separate types of cryptocurrency at the same time. Although it is not the same as the PoW algorithm and even PoS, several projects have implemented merged mining to use existing structures from a safer network as they develop.


How does Merged Mining work?

Each merged mining process involves a secondary chain and a more established parent chain. In order for two types of crypto to be mined at the same time, both chains must have the same hashing algorithm. To explain the process as concisely as possible, we will use the Namecoin pair and Bitcoin mining as an example.


In this case, Bitcoin is the parent chain where Namecoin is the "child" that uses the Bitcoin network. Both cryptocurrency has a SHA-56 hashing algorithm for mining.

Implementation
The developers of the parent chain don't have to do anything to implement merged mining. Therefore, the Bitcoin network does not even have to be "ignorant" that there is Namecoin mining being carried out at the same time.

Conversely, secondary chains require additional development to be able to do merged mining. As a result, Namecoin developers updated their blockchain to receive the same proof of mining as Bitcoin and to make it valid on the Namecoin blockchain as well.

Merged mining does not require miners to increase computing power. As a miner, you are mining both cryptos as efficiently as you are mining the parent coin. Miner only needs to complete additional settings that support merged mining.


There are several ways that can be done for mining, namely:

Also Red:  Earnings to Mine Bitcoin a Day and How to Calculate It

You are mining one block at a difficulty level adjusted between the difficulty of Namecoin and Bitcoin. Just like before, you will only get Namecoin rewards.


Strengths and Weaknesses of Merged MiningAdvantages

The new blockchain project has several advantages when implementing merged mining. The implementation of this protocol increases the security of their networks and also allows them to operate as separate chains. This secondary chain will also receive more exposure due to its association with the more popular blockchain.

Plus, the miners are also more motivated to contribute because they get extra rewards without spending more money on the process. In addition, because the miners usually trade the two coins to maintain what they have gotten, the liquidity of the two crypto will also increase.

Miners and mining poles must also provide more resources if they want to receive rewards from the two chains. Although merged mining does not involve more computing power, it still requires more maintenance.

When you are mining two blockchain, the connections that are needed and the distribution channels that need to be managed (for mining pools) are doubled. Some might consider the additional treatment to be quite comparable to the extra coins obtained.

Namecoin is the first coin to implement merged mining with Bitcoin. Namecoin is currently in the top 300 position based on the market cap, even though Namecoin has been in the top 10. This shows that a project can slowly decline when connected to the most powerful cryptocurrency network.

Although there are many mining pools that support merged mining Namecoin, this coin has not been widely adopted since its launch. This project also did not experience much development like other coins. This shows that cryptocurrency that uses merged mining does not mean that it will definitely provide a profitable investment.

At the beginning of Dogecoin, the community decided to implement merged mining with Litecoin. They found that the original mining mechanism would not produce a significant mining reward within a year. If changes are not made, the miners will not be motivated to mining again, and the network will be very vulnerable to 51% attack.

After changing from Proof-of-Work to a secondary Proof-of-Work, the price of coins increased by 180% in BTC in just a few weeks.

Although there is only one such data, this proves that a project that implements merged mining can produce profitable investments in the short term.

Elastos is an internet network supported by blockchain which integrates merged mining with Bitcoin. Since this coin is not as popular as other coins, this coin can be an investment opportunity. When the platform is finished implementing its merged mining, the price of Elastos can go up like Dogecoin.

Merged mining is a huge opportunity for startups who want to develop without the risk of being targeted by 51% of attacks. With the threat of such attacks continuing to grow, we might see more projects moving to merged mining in this industry.